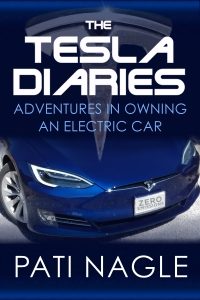 The Tesla Diaries by Pati Nagle

This short memoir is an easy and entertaining read. For anyone who’s ever wondered what it’s like to be in a Tesla.

When she first became aware of Tesla Motors and its ground-breaking electric automobiles, fantasy & science fiction writer Pati Nagle thought owning a Tesla was no more than a dream. Reveling in the futuristic wonderfulness of the Tesla Model S, she followed the company’s progress, enjoying her fantasies of having her own Magical Space Car. She took a test drive. She played with Tesla’s Design Studio, designing her own electric dream car.

And then Tesla brought out a new color: Deep Blue Metallic.

Her life would never be the same.