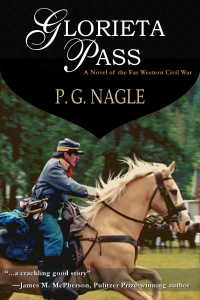 “By geographical position, by similarity of institutions, by commercial interests, and by future destinies, New Mexico pertains to the Confederacy.”
―Henry Hopkins Sibley, 1861

In 1861, New Mexico Territory is swept by change as the United States erupts in civil war. Federal troops are recalled to the east, leaving the way open for Confederates to invade New Mexico and capture its resources on the way to the ultimate prize: Colorado gold!

Three young people are caught up in the conflict: Alastar O’Brien, a Colorado miner turned soldier; Laura Howland, a young lady from Boston, recently orphaned; and Jamie Russell, a shop clerk from Texas serving as a quartermaster. The maelstrom of war brings them together in a clash of ambition, patriotism, and the simple need to survive.

“This engrossing debut…evokes memorable protagonists, vivid landscapes and high suspense, not only in the gut-wrenching action but in the relationships between her characters.” 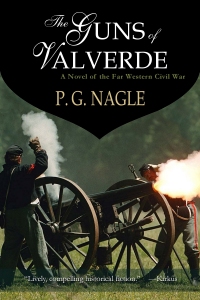 The Guns of Valverde

1862: Texan Confederates have taken a battery of Union artillery at the battle of Valverde in New Mexico. Quartermaster Jamie Russell wants to get the guns to Texas, but Federal Captain Alastar O’Brien stands in his way.

With passionate intensity and impeccable attention to historical detail, The Guns of Valverde imbues the unsung battles fought in the New Mexico Territory with a profound sense of humanity. 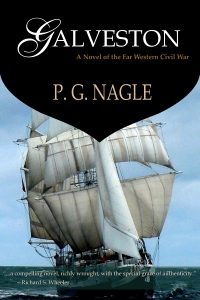 “…while we defend our rights with our strong arms and honest hearts, those we meet in battle may also have hearts as brave and honest as our own.”
―Albert Miller Lea

The Battle of Valverde is over, and Jamie Russell, now a Confederate war hero, returns home to his family. Jamie’s sister Emma has been shattered by the death of her true love at Valverde. Worried about their daughter, Jamie’s parents convince him to escort Emma to Galveston. Emma will have a chance to escape her monotonous life on the ranch, become a lady, and perhaps leave the memory of death behind her.

Jamie soon discovers that Galveston lacks the defenses it needs to ward off a Union naval attack. Troubled by leaving his sister and aunt in a place susceptible to Union takeover, Jamie returns to his unit and begs with Confederate officers to have Galveston’s defenses strengthened. His pleas fall on deaf ears. Union warships arrive in Galveston Bay, taking it for the Federals and confirming Jamie’s worst fears. Now Jamie must travel back to Galveston in a secret Confederate operation to reclaim the city and rescue his family. 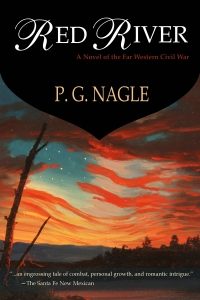 “Whatever place my name is destined to occupy in the golden book of the Republic I expect to engrave it there with the point of my sword.”
―Richard Taylor, Major-General, C.S. Army

The port city of Galveston has been reclaimed by the Confederacy, and Jamie Russell’s unit, the Valverde Battery, is sent to aid General Richard Taylor’s army in defending Louisiana. While cotton and vital supplies move between Texas and the east on the Red River, the Federal navy attempts to tighten its stranglehold on the Confederacy by gaining control of this vital waterway that feeds into the Mississippi River.

Union General Nathaniel Banks has set his sights on the Red River, and sends an army from Federal-held New Orleans to attack General Taylor’s forces along the Bayou Teche. Pushed back by overwhelming numbers, Jamie and the Confederate army retreat to the Red. There is no doubt that Banks will follow them, but first Jamie must cope with the loss of friends in the recent fighting, and the unexpected reappearance in his life of the beautiful, rich cotton smuggler, Mrs. Hawkland.

As the Federal army and navy begin to move up the Red River, Jamie and his compatriots try everything in their power to stop their inexorable advance. From blocking the river with a sunken luxury steamboat to digging canals to lower the water level, Confederate ingenuity plagues the Federals at every turn, but will it be enough to stop the large and powerful Federal forces from seizing control of the last Confederate lifeline? Jamie knows he is moving toward what may be the final confrontation for Taylor’s army and the Valverde Battery.

“Nagle vividly depicts its hardships and dangers. The Civil War history is accurate and colorful…” 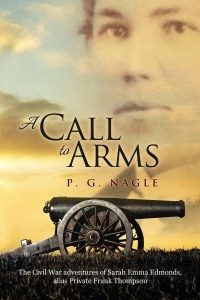 A Call to Arms

1861: as America erupts into civil war, Emma Edmonds is roused to such intense patriotism that she joins the Union army…as a man.

Raised on a farm by a father who would have preferred a son, Emma can ride, shoot, and hunt as well as any man. She defies convention to become a soldier, an army nurse, even a spy. Dangers surround her, from enemy fire in battle to the risk of discovery by her friends, which would end in court-martial and disgrace.

Always she seeks to reconcile the necessity of deception with her deeply-held values, but her greatest challenge arises when her friendship with a fellow-soldier becomes so close that she is tempted to confess the truth and risk everything for a chance at love.

Based on the true adventures of Sarah Emma Edmonds, who served for two years in the 2nd Michigan Volunteers as Private Frank Thompson.